Welcome to my Three Provinces Swim website. For those of you who don't know me, I swam Lake Ontario the easy way in 1983 and the hard way in 1984. I “came out of retirement" to swim the English Channel in 2011. In 2013, I was the oldest Canadian to swim the Strait of Catalina in California. Last year, I completed the Manhattan Island Marathon Swim and became the first Canadian to complete the Triple Crown of Open Water Swimming. The 3 swims are the English Channel, the Catalina Strait and the Manhattan race. (See links below for more detail.)
This year I am hoping to become the first person to do the Three Provinces double crossing of the Northumberland Strait. I plan to swim from Nova Scotia north 33 kilometers to Prince Edward Island (PEI) and then south 13 kilometers to New Brunswick. Why a swim in the Canadian Maritimes? I was looking for a cold water ocean swim and I decided it was time to be the first to swim a Canadian route. This swim is a warm up to another goal, to swim the Cook Strait between the north and south islands in New Zealand next February, one of the toughest swims in the world.
The Northumberland Strait is the site of the Confederation Bridge, 13 kilometers long, linking New Brunswick to PEI. The biggest challenge to swimming is the tide, which floods through the strait in a southeasterly direction more strongly than it ebbs northwesterly. The tides vary from 2h 47 min to 8h 36 minutes. I am expecting a maximum tide speed of 1.2 knots. The tide is at its lowest for the month during July 23-28. It will be quite the challenge to pick a start time for this 24 hour swim. The other challenge is the jelly fish, both lion’s mane and moon jellies. I am reassured that the jelly fish are not bad in July. They also tell me there are no sharks in the strait. The water temperature should be between 62 and 68 degrees F (16-20 degrees C).
There have been three double crossings of the Northumberland Strait between New Brunswick and PEI: Jen Alexander July 2007, Kristen Roe July 2008, and Jeremy Davidson August 2014. Jeremy was only accompanied by one kayaker. In light of the fact that there is no governing body for the Northumberland Strait, the level of substantiation and safety of the two dozen single crossings varies greatly. I am planning on following all the rules of the Marathon Swimming Federation and the World Open Water Swimming Association. I am ecstatic to report that Jen Alexander will be my official observer.
I am pleased to be able to use this opportunity to raise money for the Good Shepherd Centres in Hamilton. They run a network of shelters and services for troubled youth, abused women and children, the dying, the mentally and physically challenged, the hungry and the homeless. They strive to support people through crisis and help them re-establish healthy and productive lives. I am personally very grateful to a great many staff at the Good Shepherd who have helped so many of my patients. Please support my swim by donating to the Good Shepherd Centres. Thank you.
http://www.goodshepherdcentres.ca/events/view/28

Many people have asked about my training.
When I trained for the English Channel and Catalina, I followed Marcia Cleveland's training plan that she outlined in her blog http://www.doversolo.com/catalina.htm. She was training at age 44 for Catalina. I think she mentioned that she was an older athlete and didn't train as many yards as she did when she was younger. I figured that worked for me since I also had the mileage under my belt from previous swims. I have converted her yardage estimates into kilometers. In the fall she swam up to 18 km per week, in Jan & Feb she swam up to 23 km/wk, in March/April she swam up to 27 km/week and in May/June, she swam up to 32 km. Catalina was a 32 km swim, so I figured that the goal is to build up to "the distance of the swim per week" by the last couple of weeks before the taper.
Since the Three Provinces swim is a 47 km swim, and this is my 5th year in a row of doing big swims, and I am 58 with several shoulder injuries caused by falls, I decided I needed to work up to 47 k per week but I didn't want to push the mileage until I could get outside in May. So April was 27 k per week, May averaged 32 k per week. June will be 36 k per week. There will be one week of 40 k and two of 47 k.
I worked on speed and technique in the pool alone and with my Masters team. Since May 10 I have been swimming outside and focusing on distance.
I have been doing core strength training with my trainer twice a week this year. I am also working on keeping the muscles around the joints "balanced" and keeping the injuries at bay with my trainer and Active Release Technique chiropractor.
As in previous years, I will do one long "trial swim" of 32 km in a couple of weeks.
Marilyn
Posted by Marilyn at 6:41 PM

I did it! First person to complete the 3 Provinces Swim 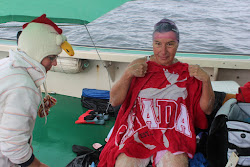 Still covered in lanolin and wearing my see-through cap

Coming into PEI under the Confederation Bridge 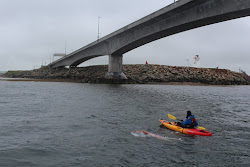 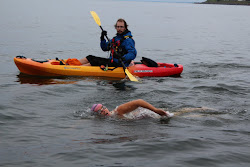 Having fun in the Northumberland Strait 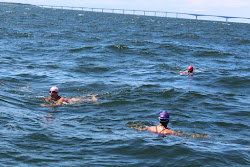 Going for a ride on the Classy Glass 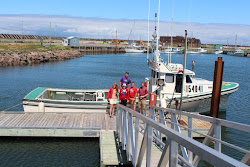 Training swim in the strait 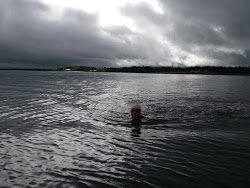 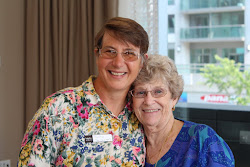 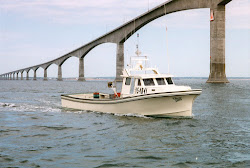 My boat for the Northumberland Strait 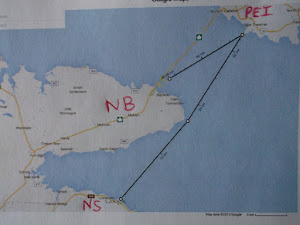